Can My Dog Eat Popcorn?

Dogs are so good at being mans best friend that it becomes easy to forget that they’re not man, they’re canines.

Therefore, there are just some things that we can eat, that dogs shouldn’t.

For example, you may be an excellent baker with your awesome kitchen appliances, but give your dog some of your chocolate chips, and you could poison him!

So now as you’re getting ready to plan a movie night for yourself and you’re thinking about the popcorn you’ll make with your fancy popcorn popper, you’ll begin to wonder if you can share some with your dog.

If you are looking for a special dog treat while you enjoy your treat, consider Pup Corn! 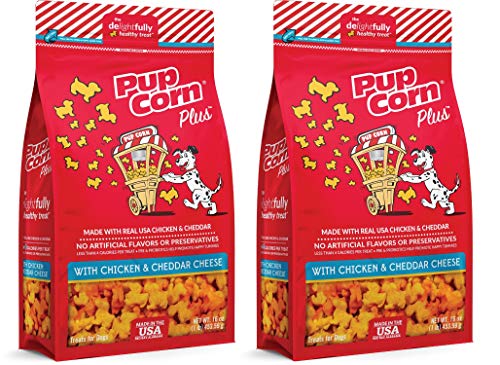 So can dogs eat popcorn? That’s not an easy answer. There are a few more variables to consider first. Read on!

Is popcorn bad for dogs? This can be a complicated question to answer, so we want to make sure that all of our readers are on the same page.

Before we take a look at popcorn in particular, let’s see whether or not dogs should consume human food in the first place, because there is a lot of confusion about this topic.

You may have heard that dogs should never eat human food, and this is entirely untrue. While it is true that certain foods that are safe for human consumption can have harmful effects on canines the reverse is also true, as we are different species. However, most foods (in reasonable amounts) will be safe for dogs.

Is Popcorn OK For Dogs?

So is popcorn safe for dogs? This question is similar to the question of whether or not popcorn is healthy. Popcorn is a very versatile food that depends heavily on its toppings for flavor and nutrition. Since popcorn is so dependent on toppings, you will have to consider them before feeding your dog popcorn.

Popcorn itself isn’t bad for dogs, but butter oils, salts, and other toppings that we often put on butter can contribute to obesity and obesity related health problems in both humans and canines.

Air-popped popcorn without any salt in it is good for your dog because it does not contain anything other than a popped corn kernel.

If your air-popped popcorn is lightly salted, you may still feed it to your dog, but you will want to keep popcorn as an occasional snack. Popcorn that has been made in an air popper without any added toppings does not have enough nutritional value to result in a meal for your dog.

Things To Avoid In Popcorn For Dogs

There are a few things to watch out for when you are feeding your dog popcorn. First of all, you will want to go through the popcorn that you are going to give to your dog for any unpopped kernels or other bits that they could potentially choke on.

Popcorn can sometimes be difficult to eat, and dogs don’t exactly have the same forethought that people do while they are eating. While it is not likely that your dog will choke on a popcorn kernel, it would do best to eliminate the possibility of that scenario occurring in the first place.

Popcorn butter is one of the leading ingredients that can make popcorn bad for dogs since it can diminish their cardiovascular health. Keep in mind that dogs are also physically much smaller than people, so their bodies will be affected more drastically by a high concentration of carbs and sodium.

Speaking of sodium, you will also want to avoid popcorn that is high in salt because it could raise your pet’s sodium levels to dangerous levels. Increasing your intake of this nutrient beyond recommended levels could have severe consequences for the health of your dog’s heart.

You will also want to stay away from dessert popcorn. It has been proven that most types of dessert popcorn are among some of the least healthy forms of popcorn on the market. Since dessert popcorn is so much higher in carbs than air-popped popcorn, your dog may have to deal with obesity and other health issues.

Of course, you will want to stay as far away as possible from chocolate-drizzled popcorn as that can be potentially deadly for your pet. Theobromine is a substance that is contained in cocoa; it can’t be broken down by dogs, which makes it toxic and hazardous.

It’s possible that it could. If it has oils, salts, butters, or other yummy flavorings, it could have a negative affect on your dog.

No Replacement For A Proper Meal

No matter how much your furry friend may like popcorn, they won’t be able to eat it all the time.

So, will you feed your dog popcorn?

If you would like to feed your dog popcorn from time to time, you will want to avoid popcorn that has been popped in oil or has had anything else added to it. Pure, air-popped popcorn is fine for dogs as long as you make sure there are no unpopped kernels left. Feel free to let us know what you think in the comments section.